At the end of the 2017, the French government proposed sanctions on top supermarkets that did not perform their due diligence with regards to food safety. This threat to sanction came after a scare of baby food being contaminated with Salmonella. France’s largest retailer had reported selling nearly one thousand products, while other supermarket chains sold the product in hundreds. This comes after the 2008 breakout of 50,000 babies in China being hospitalized after eating infant formula, which was contaminated with melamine. Food safety and contamination is not limited to baby food but extends to all food types around the world, like the recent North American recall of romaine lettuce.

Of course, manually testing every product for sale from the manufacturer or the seller is not foolproof, despite the best safety precautions in place. Recently, however, researchers have proposed a solution to check items — instantly and non-invasively.

MIT Media Lab announced the latest development of putting food safety in the hands of consumers. Researchers had created a wireless system that utilizes cheap RFID tags, which are currently on billions of products, to detect food contamination. Checking the products do not require any hardware modification and serves as a scalable solution for the mass public.

Radio frequency identification uses a small antenna which is installed in a label that is triggered by radio waves at a distinct frequency. Traditionally, RFID labels and scanners are widely used across different industries for inventory control. When a transceiver sends out a signal, the RFID tag is triggered and re-transmit a slightly different signal back to identity itself. “It’s almost as if we have transformed cheap RFIDs into tiny radio frequency spectroscopes,” said Fadel Adib, co-author of the paper describing the new system in an MIT news release.

Researchers at MIT leveraged machine learning to create a model to differentiate between certain ingredients in different products. The research team refers to this as RFIQ, which allows the reader to sense up to date changes in wireless signals from RFID tags when they interact with food. The model is based upon certain modifications of the signals emitted from the RFID tag, identifying the levels of contamination within a product. Machine learning is used to ‘learn’ the comparisons, and if new material is introduced, it can predict if the content is pure or contaminated. 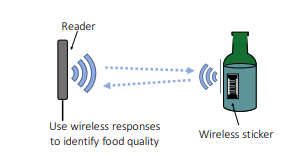 As the research is in early stages, the team started their trial focusing on baby formula and alcohol. At the moment, RFIQ can differentiate between pure baby formula and baby formula contaminated with melamine. A series of tests were conducted by experimenting with different bottles, each with 100g in total and anywhere between 0% – 30% of melamine. There was a 96% accuracy rate, with the RFIQ also having the potential to identify the degree of the substance.

The vision for the RFIQ is for consumers to have the ability to perform food safety tests before purchasing products. Supermarkets can also install systems in their back rooms or smart fridges to ping an RFID to detect food spoilage.

Previously, attempts have been made to identify food contamination and spoilage, however, the approach was not as dynamic as the RFIQ. The previous method was to use specialized systems and coat the sensor with a chemical used to detect specific contaminants. On the contrary, the technique used for RFIQ is referred to as radio frequency spectroscopy, which uses electromagnetic waves over frequency to measure the various interactions, meaning no chemicals are required and it can utilize a common RFID tag.

As RFID tags are very affordable, costing a few cents, they are already being used on vast amounts of products. Researches decided to leverage the current tags and their ability to power up with small electromagnetic waves which they emit and become distorted by molecules and ions. This mechanism is also referred to as ‘weak coupling’ which relies on the fact that if the materials property changes, the signal properties change as well.

The researchers at MIT have made a significant breakthrough with this study of leveraging affordable RFID tags to detect product contamination. They are working towards being able to adapt this technology to other products and provide consumers with the ability to verify the safety of their products before purchasing. Read more about the research on MIT’s website here: https://www.media.mit.edu/projects/learning-food-quality-and-safety-using-wireless-stickers/overview/

How the RFID System is Changing the Internet of Things
May 3, 2019

How RFID Is Connected To Your Business Intelligence
January 11, 2019

Does the Aviation Industry have a Need for RFID?
July 5, 2018

RFID and Its Revolutionizing Role in Waste Management and Recycling
June 5, 2018

The Need for Traceability in the Food and Beverage Industry
April 20, 2018
Jet Marking Systems is a proud partner of:
Check out our YouTube Channel for a variety of troubleshooting videos!
JMS YouTube Channel
Download now